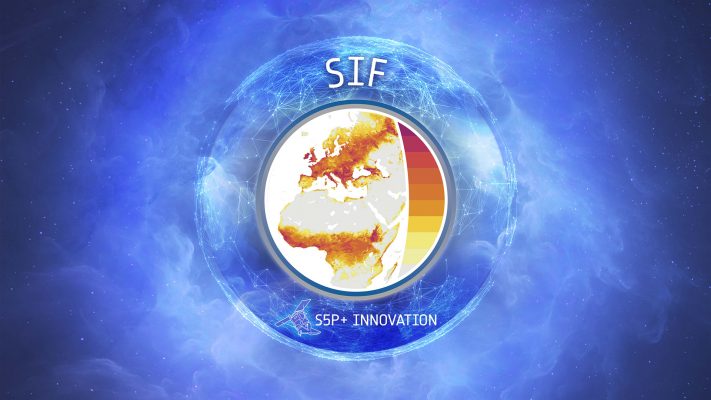 The ESA –TROPOSIF project is one of the seven themes from the Sentinel-5p+ Innovation (S5p+I)  activity funded by ESA, which aims at developing novel scientific products / retrieval methods from the data acquired by the TROPOMI (TROPOspheric Monitoring Instrument) instrument aboard the Copernicus Sentinel-5 Precursor mission launched in October 2017.

Although the Sentinel-5P mission was designed to monitor the Earth’s atmosphere, TROPOMI’s spectral and radiometric performance enable to also monitor terrestrial Solar Induced Fluorescence (SIF) with an unprecedented spatial and temporal resolution.

Solar induced chlorophyll fluorescence (SIF) is an electromagnetic signal emitted by the chlorophyll a of assimilating plants: part of the energy absorbed by chlorophyll a is not used for photosynthesis, but emitted at longer wavelengths as a two-peak spectrum roughly covering the 650–850 nm spectral range. The SIF signal responds instantaneously to perturbations in environmental conditions such as light and water stress, which makes it a direct proxy for photosynthetic activity. However, SIF emission constitutes only a small fraction (typically 0.5%-2%) of the radiance at the top of the canopy, which is mostly composed of reflected sunlight, and its estimation from space-borne spectrometers requires both high spectral resolution and advanced retrieval schemes.

Why should we care about SIF?

Over the last few years, solar-induced chlorophyll fluorescence (SIF) observations from space have emerged as a promising resource for evaluating the spatio-temporal distribution of gross carbon uptake (GPP = gross primary productivitt) by terrestrial ecosystems, the characterization of which still remains uncertain to date. In the particular case of climate studies, our ability to anticipate the evolution of net and gross carbon fluxes over the globe under a changing climate largely relies on global terrestrial biosphere models (TBMs). Their parameterization remains largely uncertain and it is anticipated that satellite SIF products will provide a significant constraint (reduction in uncertainty) on the projections of the terrestrial carbon updake.