In April 2019 ESA awarded the Euro Data Cube (EDC) contract to a consortium of partners led by Sinergise. Rather than funding the development of a completely new service, the project was based on the integration of existing operational capabilities run by the project team, up to the creation of an EO Information Factory.

Such an effective approach allowed the EDC to be launched in the same year and to take the world by storm in the two years that followed. Its services are now powering hundreds of applications worldwide; processing more than half a billion requests every month; distributing satellite data from an archive exceeding 50 petabytes; serving half a million users monthly.

Remote sensing is no longer a small niche occupying a few thousand experts globally – just about anyone with Internet access can participate, thanks to the ease of access guaranteed by EDC tools. It is not a minute too late to join this already considerable crowd – mitigating climate change demands everyone to engage to monitor the world. If we want to change our behaviour patterns and those of corporations, we need first to be able to measure the environment, and satellite data provide the systematic, objective stream of information allowing us to do just that.

The main challenge for the EO professionals is raising awareness on how and why to make use of satellite data. Most people associate satellite data with a static layer in Google Maps, mostly used to get familiar with the surrounding of a specific location. The power of EO, however, comes from the monitoring capabilities allowed by multi-spectral and multi-temporal data. This is a complex task per se, even before bringing in the technical issues associated with processing of petabyte-scale data archives.

EO Browser (and its sibling, EDC Browser), with its powerful, yet easy-to-use features, is there to bridge this gap. Its free-use policy, fast performance, and simple sharing of findings over social media in form of animations and colourful images make it a perfect tool for enthusiasts to explore just about anything they are interested in (e.g. monitoring wildfires, deforestation, glacier movements as well as human-made constructions).

The app is used in schools, to familiarize students with remote sensing, as well as by scientists and corporations to search for relevant satellite data and extract information. This ability, to discover data of various types and sources, is extremely important to increase the uptake of EO data.

Several stories have been derived from EO Browser explorations, such as scientists identifying a new colony of penguins in Antarctica by observing the impact of their poo to the surrounding ice-sheet or a remote sensing enthusiast using EO Browser to geo-locate a photo sent by a lost hiker, sending search & rescue team to the right location. In both cases, it was essential to have access to recent (sometimes just hours old!) multi-spectral imagery and a tool to allow easy manipulation.

Since people are asking, how to geolocate a #hiker given only a general location and a grainy photo of their legs hanging off a cliff (thread) 1/x pic.twitter.com/81V0LGQdUk

The beauty of making the data available to a large group of people, from experts to the general public, is that you can tap into a wide range of interests and experiences, going well beyond remote sensing. This became especially apparent at the surge of the COVID epidemic in Europe in 2020. European Commission and ESA decided to crowdsource ideas on how to efficiently monitor the impacts of the epidemic with the help of satellite data, launching RACE (Rapid Action on Coronavirus and EO) contests. Euro Data Cube was the perfect tool to support such activity as it allowed interested parties to make use of the data without investing time in basic data access and pre-processing tasks. Participants got access to all the EDC tools, integrated into EOxHub Workspace, which allowed them to prototype the process from the data to the extracted information. In a matter of a few months from the idea concept, we did not just get a ton of interesting ideas and prototypes, but also some fully operational solutions, which were then integrated into the RACE Dashboard. An initiative like this would not have been possible without having all these tools at hand, integrated into one place.

The real power of satellite data comes once the 3rd party developers start building tools on top of the data and services. Tools that are tailored to specific user communities. Application developers are typically quite conservative in relying on external services, especially payable ones, preferring to have full control over the workflow. The complexity of big EO data on one side and ease-of-access and effectiveness of Euro Data Cube services on the other, however, have persuaded many to try and build solutions on top of it. There are several hundreds of applications globally using EDC services to provide simple visualization-derived products or even to power complicated machine-learning assisted procedures, in the fields of precision agriculture, environmental monitoring, energy and natural resources, security, mapping, and others.

Where Euro Data Cube really shines is in supporting large-scale machine learning exercises. These typically include a task of feature preparation, i.e. creating temporal stacks cleaned for clouds, gap-filled, and interpolated to a harmonized frequency. EDC Sentinel Hub Batch function has been used so far to process an equivalent of more than 50 billion sq. km of Sentinel-2 imagery. Even the bigger players in the field have recognized its value and decided to use this service rather than building their own stacks, regardless of their capacity to do so, in order to focus on elements of the processing chain with the highest added value.

Even though EDC was designed around Sentinel satellites, it did not stop there. The team has quickly recognized the need to incorporate other missions, like Landsat and MODIS. ESA facilitated cooperation with providers such as Airbus, Planet, and European Space Imaging, making it easier for developers to access commercial data, not just technically but also from the point of purchase and licensing. More than 700.000 sq. km of data originating from these satellites were consumed within the Euro Data Cube. It’s also not just about EO data – EDC became a proud distribution channel for various derived products such as Copernicus Services. Users can also onboard their own raster data, to be used for further dissemination or processing within EDC – more than 3.5 million tiles have been registered so far.

The latest capability of EDC, launched during Phi-Week in October, is Bring your own algorithm, a functionality allowing EO experts to deploy their algorithms in order to serve other users in the easiest possible manner – without humans in the loop, with transparent costing and fast performance. This will open the door to host more and more complex capabilities, developed by the community. 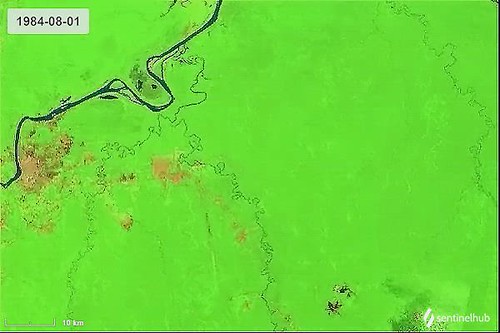 Euro Data Cube’s successes to date are just a piece in the mosaic of making EO data as valuable and used as deserved. The path is a long one, but progress is apparent. An ever-increasing number of actors are realizing that there are components of the processing chain which are already available and value their use more than a possible own re-development. EDC has become a prominent player in this field.

The future, besides continuous innovation, will be focused on integration into as many initiatives as possible. ESA’s openEO Platform, which uses the power of EDC and builds on top of it, is one example. Digital Earth Africa, AI4EO, and many others are also part of the list.

To anyone interested to try, make sure to head to Euro Data Cube or apply for ESA-sponsored packages in the scope of Network of Resources.

About EO industry and public private partnerships: let us hear your voice at LPS22

About EO industry and public private partnerships: let us hear your voice at LPS22