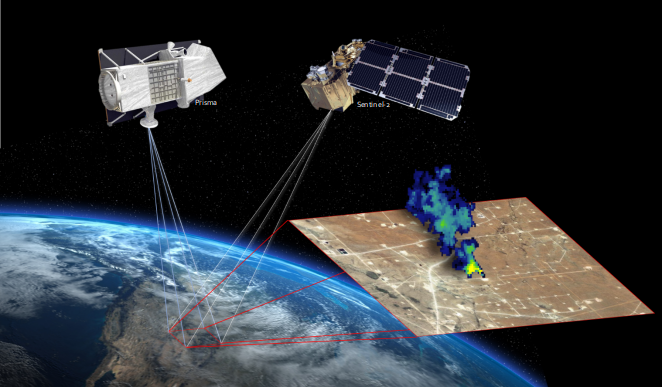 The detection and repair of methane leaks from fossil fuel production activities have been identified as a key climate change mitigation strategy. In the last years, a number of optical satellite missions with a spatial resolution of 30-m or better have shown potential for the detection of strong methane plumes emitted by point sources, which is key to guide emission reduction efforts. Those high resolution missions include two types of optical imagers, namely hyperspectral (e.g. PRISMA) and multispectral (e.g. Sentinel-2). The number of studies using either of those classes of spaceborne instruments to map methane point emissions is rapidly increasing. The overarching objective of this project is to assess the potential and limitations of spaceborne hyperspectral and multispectral missions for high-resolution methane mapping. Critical tasks to achieve this goal are the implementation of a realistic end-to-end simulator, the development of advanced methane retrieval methods, and the evaluation of methane emissions at different sites using real data from those missions.

Methane (CH4) emissions from fossil fuel production activities have been found to account for 35% (range 30%–42%) of total global anthropogenic emissions. Emissions mostly originate from oil and gas production infrastructure, such as wells, gathering stations, compressor stations, storage tanks, pipelines, processing plants, and flares, and also coal mines can be strong methane emitters. These industrial methane emissions typically happen as so-called “point emissions”, namely plumes emitted from small surface elements and containing a relatively large amount of gas. The detection and elimination of unintended methane emissions from fossil fuel production activities have been identified as a key means to reduce the concentration of greenhouse gases in the atmosphere.

The Sentinel-5P/TROPOMI mission, launched in 2017, is leading a revolution in this field, but its 7-km pixel size does not generally allow for sampling of individual point sources. Fortunately, very recent scientific developments are showing that high-resolution (30 m or better) methane retrievals are possible using land-oriented satellite missions with optical imagers sampling the 2300-nm methane absorption. On the one hand, hyperspectral missions have a relatively high sensitivity to methane due to their dense spectral sampling of the strong methane absorption at 2300 nm, but only provide sporadic acquisitions over pre-selected sites. On the other hand, multispectral missions offer a continuous global coverage within some days, but with a lower sensitivity to methane than hyperspectral missions. Better understanding the potential and limitations of these new data sets, and the synergies between them and with TROPOMI, are key for future satellite-based methane emission mitigation efforts.