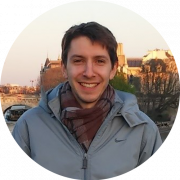 How is the on-going climate change impacting the ozone recovery?

Carlo is a postdoctoral researcher at the University of Bremen, in Germany. He completed his Master degree at the University of Bologna, Italy, in 2014, investigating the cloud signatures in the Far-Infrared spectral region from observations performed on the Antarctic Plateau. Afterwards he moved to the University of Bremen for a PhD in environmental physics, completing it in 2019, under the supervision of Prof. J.P. Burrows. The topic of the dissertation was the retrieval of ozone profiles from satellite observations in limb geometry and the study of long-term ozone trends in the stratosphere. He is currently a member of the research group at the Institute of Environmental Physics (IUP), and is involved in the ESA Ozone CCI project.

The first objective of his research is focused on satellite data. The error budget for both SCIAMACHY and OMPS-LP data sets will be extensively assessed using the current version of the ozone products. An extensive validation of the profiles is planned, including the investigation of the long-term stability of the OMPS-LP time series in collaboration with the research group responsible for the instrument at NASA. In addition, an improvement of the lower stratospheric ozone retrieval is planned, by exploiting OMPS-LP and Sentinel 5 Precursor observations in synergy.

Having established the quality of the datasets, the second objective is to study longitudinally resolved long-term changes, using the merged SCIAMACHY/OMPS-LP data set covering the period 2002-2021. The observations will be compared to the chemistry transport model (CTM) TOMCAT in order to identify mechanisms responsible for the observed ozone changes and their zonal asymmetries. A collaboration and a visit of the research group at the University of Leeds running the TOMCAT model is planned. The focus of this study will be on atmospheric regions which are still controversially disputed in the scientific literature, such as the lower tropical stratosphere and polar regions.