It is no news that the use of social media by the science community has grown over the recent years.

Platforms like Twitter offer a quick and efficient tool to engage/enlarge audiences across the globe to showcase research and findings, but not only…

@EO_OPEN_SCIENCE (ESA Twitter account dedicated to Open Science and EO users) reaching 10k followers was a good chance to celebrate and get some insight into the EO social media community, by challenging them to tweet and share the importance of open science in the context of Earth observation.

Many tweets, GIFs and threads illustrated the spirit of this growing and enthusiastic community, but most importantly gave evidence of the importance of Copernicus open data policy that empowers anyone to develop applications and convey messages, leading in some cases to particularly interesting results.

Out of a number of interesting tweets, five were selected. Let’s put faces to people behind them and get to know their motivations and the role of online presence in their daily lives and work. Click on below to find out more and on the image to go straight to the original tweet.

Annamaria took her first steps in remote sensing in 2014, joined Twitter actively in 2017 contributing to some maps following the fires on Vesuvius and she never stopped since then. She has accustomed us to mesmerizing volcanoes or bloom images.

My goal has always been, first for myself and then for others, to show how fantastic this angle of the universe (the Earth) is. I started publishing my images systematically because at university I realized that not all people were aware that remote sensing is much closer to everyday life than they could imagine. Extreme events, biodiversity, geosciences, climate change, etc etc. The results are what you see.

I am extremely happy because I noticed that more and more people are approaching remote sensing, thanks to the enormous possibilities offered by open data. And this, in my opinion, is a great achievement that in the future will certainly lead to greater innovation and awareness. 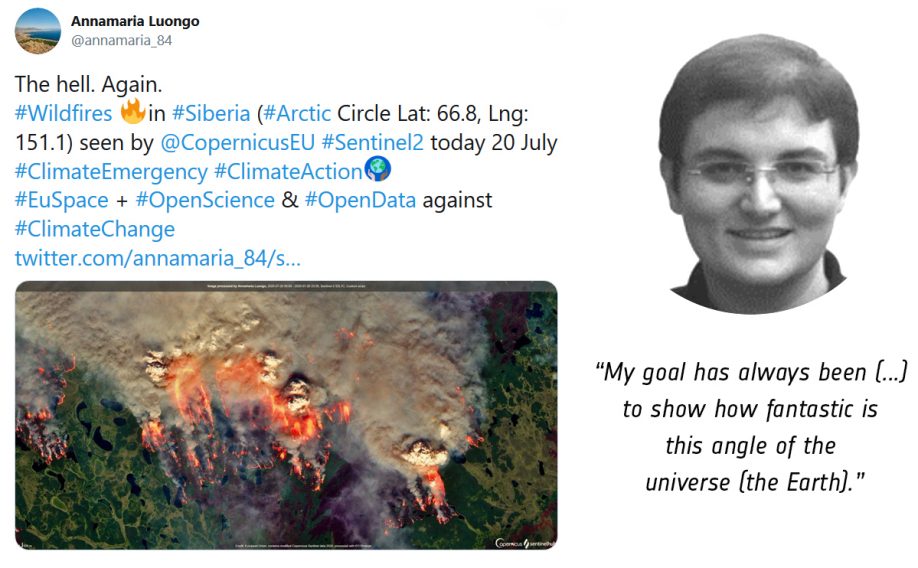 PIERRE MARKUSE - Pierre Markuse (@Pierre_Markuse) got the most liked tweet of this contest.

Starting with maps for disaster relief while working at the German Red Cross, Pierre jumped to the IT field to later go back to EO in 2008 when Landsat data became open. He has actively used Twitter for remote sensing since 2015, and one of his flagship themes (wildfires) harnesses a lot of interest on his account.

Not only within the context of Earth observation but in science communication in general you have to be where people are. Where people talk. Twitter and other social networks are such places. There is nothing wrong with science communication in more traditional media and we need that as well, but social networks are quick and reach so many people. They are good to grab attention and show people little nuggets of science/information: maybe they do not even notice they’re learning something. It is also a good place to grab their attention, interest them in some science news, getting them to explore more on their own or read a longer article. And apart from doing science outreach, social networks – and here I speak mostly about Twitter – are wonderful tools to connect scientists, experts and journalists, and exchange expertise, ask questions and learn something new. This is also true for the general public: some people would be surprised to see that they could get direct answers from top scientists on Twitter by just asking nicely and being patient.

I’d say there is a growing acceptance of using social media for science communication. More and more scientists and journalists are using social media in that way, as well as media outlets of course. I believe times of people reading a newspaper as the first thing in the morning are long gone for most people. Even news websites won’t replace that habit. Social media, however, has taken the role of the “great distributor” of news. People use it to talk to family, friends, colleagues, and they also use it to get the news. Sure, they will read the full story on some website, but lots of them will have gotten there from a social media link. Social media is also more regularly used to show people the potential of EO data. Just look at the Sentinel Hub EO Browser for example. Its images are shared widely on social networks, in return getting more people to use it as well and learn what is possible. This is true for the general public, scientists, educators, journalists, and people in many different fields of work, searching for methods to use EO data. 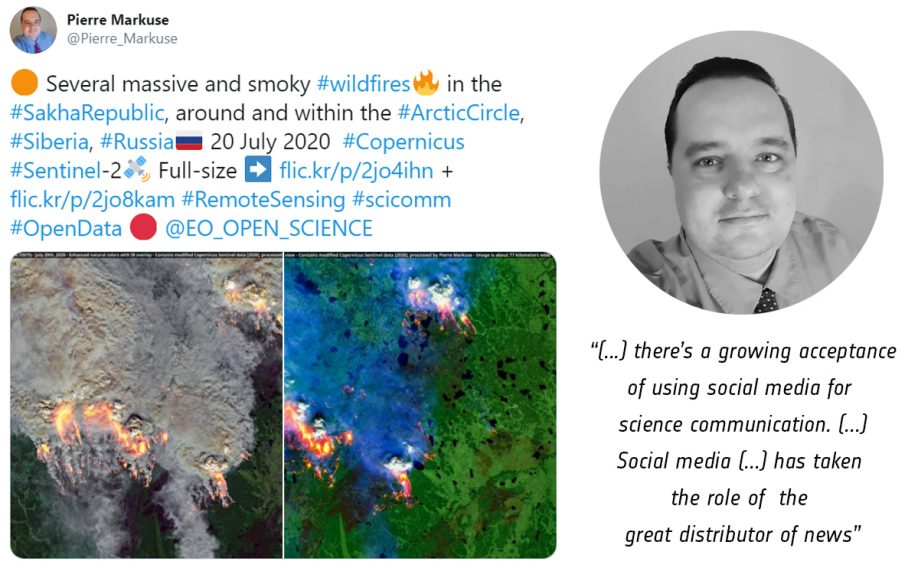 Besides being a Science Principal Investigator and co-Investigator, Emil is also the Regional Science Coordination Lead for West Africa, at the SERVIR (NASA). He joined Twitter on 2016, but it was a while after that he focused on the potential of Copernicus Sentinel-1 data.

However, in 2011, I started experimenting with social media by setting up a few Facebook groups for GIS and remote sensing in the Caribbean, and related to the work we were doing at the time with SERVIR in Mesoamerica. I joined Twitter in 2016, but it wasn’t until mid-2018 that I became a more active part of Twitter’s Earth science community.

I have certainly learned a lot from the other scientists I have followed on Twitter, and having amassed a few thousand followers, I also see an opportunity to help amplify the messages of others. It’s a great opportunity to share useful, relevant research. Among others, I am especially impressed by the efforts of @LadiesOfLandsat in, on a weekly basis, highlighting relevant research.

From my perspective, there has definitely been a sea change in attitudes toward science communication and social media. It seems like a decade ago, people thought that social media was a fad, and consequently, attitudes towards its use were often dismissive. However, it would appear that in the past half-decade, an engaging community has emerged on Twitter in particular. One can follow as well as engage with people ranging from the heads of space agencies to noted Earth scientists working in government, as well as academia.

There are members of the EO community on Twitter such as Professor @GISWQS of the University of Tennessee who has used Twitter in innovative ways to engage fellow users with training videos for code for data analysis. From the SERVIR side, most of my colleagues from the Science Coordination Office have themselves also taken to social media, and we also have colleagues from our SERVIR hubs who are very active on Twitter. 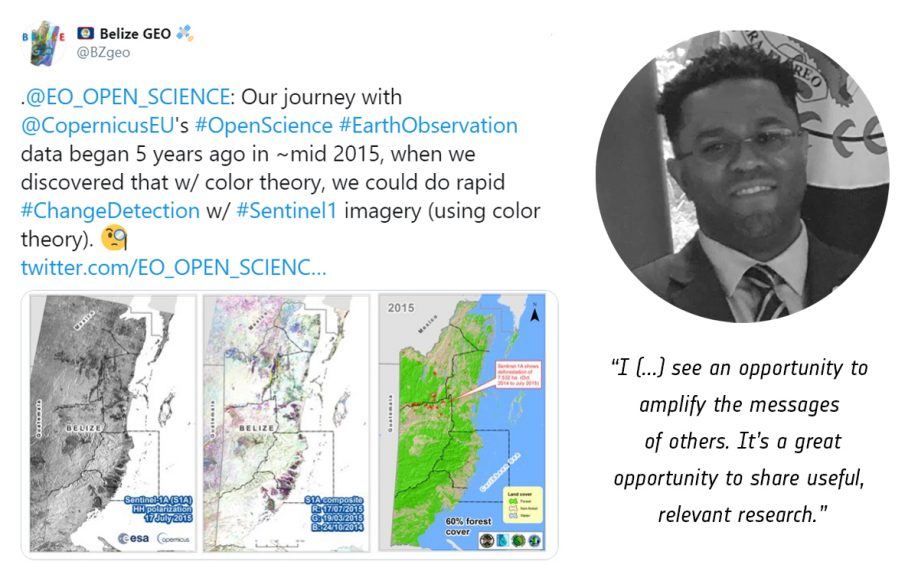 The result? A true, playful art display! He became fully immersed in EO in 2014, and is currently focused on automation of GIS and remote sensing tasks. Scroll through his Twitter account to go throw amazing displays.

I think that today social networks in general, and Twitter in particular, are essential. On the one hand, they are something very useful to make yourself known and show your work to the world. On the other hand, it’s fascinating how many talented people are out there willing to help you.

I’m thinking, for example, of Justin Braaten (@jstnbraaten) and Philipp Gärtner (@gartn001), who have helped me more than once with my questions about Google Earth Engine. And especially in Qiusheng Wu (@giswqs), who not only has helped me a lot with technical issues, but is also the creator of the magnificent Geemap, a python package that makes really easy working with Google Earth Engine from python, and what is the base of my tiny ndvi2gif library to play with seasonal ndvi-based compositions.

I think so, I have the feeling that large companies and international organizations such as NASA or ESA are making an important educational effort, to make known to the general public the amazing info that you can get from space. And above all, I’m trying to show the usefulness of EO products, especially in this time of global change that we are living in.

Stéphane is a digital guru leading a team that performs market and communication development to clients such as the European Commission, ESA and private corporate clients. He has been active on Twitter since 2017 and his team created and manages many EU and Copernicus accounts. Copernicus imagery produced by him and his team makes it into the New York Times, Wall Street Journal, Euronews, The Guardian, to name a few.

Social media are an ideal channel to connect with people with different backgrounds, from anywhere in the world, and deliver the Copernicus message to their door. The massive presence of scientists, media reporters, elected officials, etc. in one place offers unique opportunities for promotion. As EO imagery is also often very ‘visual’, it provides material for eye-catching and attention-grabbing publications.

Indeed… We see the number of EO professionals with a presence on social media steadily growing. With the vast amounts of EO data available, combined with free-of-charge processing resources, we regularly notice the arrival of talented ‘newcomers’ who generate healthy competition. The quality and variety of EO imagery and data published on social media is continuously improving. In view of that trend we now employ professional experts in order to strive to remain ‘ahead of the game’ as much as possible.