The Sentinel Hub project started in 2016 as one of the ESA PECS-funded activities with the objective of making Sentinel-2 data accessible in an easier manner. Now, three years later, Sentinel Hub is widely used, and serves not only Sentinel-2 but also data from numerous other EO satellite missions. It is used not just by remote sensing experts but also by hundreds of application developers, who integrate EO satellite data into solutions for precision farming, mapping, defense, oil & gas, policy making, and many more. In March 2019, Sentinel Hub processed, for the first time, more than 100 million requests that month. A bit more than that actually, 130 million!

Sentinel Hub is a cloud-based data API, providing instant and seamless access to Sentinel, Landsat, MODIS and other datasets. More than 5 PB of data are available through it, and today this is increasing at a rate of about 300 TB every month thanks to Copernicus, USGS and others. Various data formats, projections, meta-data – all of these complexities are hidden from users, who simply ask for pixel values at some specific area of interest and time. Or a visualised image. Or statistics over a longer period of time.  It is one single, unified API which anyone can use to get satellite data in today’s Big Data world. 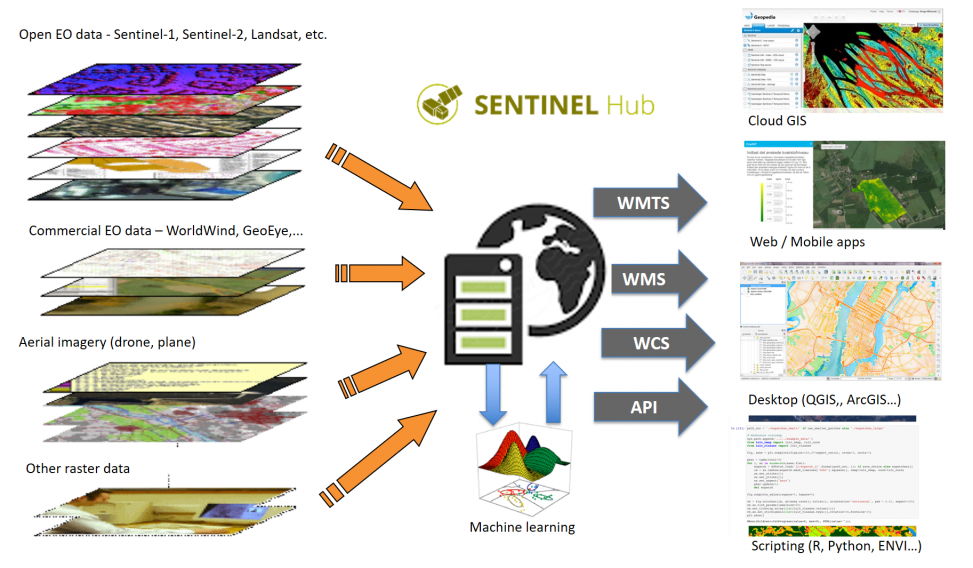 Powering applications around the world and machine learning exercises

The main group of users are application developers. They integrate Sentinel Hub into their apps which create added value from the satellite imagery pixels. Many of them are operating precision farming applications. Small and large ones. The API makes it possible to focus on how to create something valuable for end-users, rather than just shuffling pixels. The most important feature is the possibility getting data from anywhere on the planet, either from a couple of years ago or from an acquisition just a few hours ago. This assures that their apps will be relevant and scalable, reaching end-users from all around the world.

The most heavy-duty users are the ones using the data for machine learning. These are often research organisations but also include commercial entities. The largest use-cases are in mapping and insurance. Never before was it possible to get detailed insight into what is happening on the ground this fast, and on a continental level, yet still detailed enough to be useful. The eo-learn library, with open-source tools developed by Sinergise, makes the whole process even easier.

Altogether there are more than 600 paid subscription accounts, about 3,000 new trials per month and 34,000 registered users who access remote sensing data through EO Browser. Since most of the accounts stream data to their end-users, the total number of effective users is in reality much larger. Due to use of proxies it is not possible to know exactly how many are there, but counting only unique IPs, there are now more than 160,000 per month. 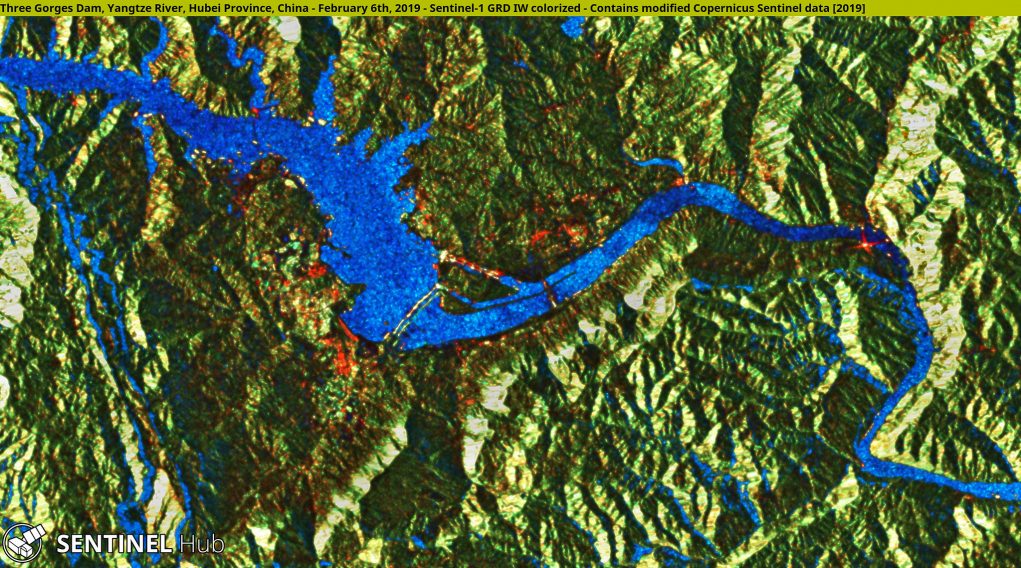 Raising public awareness about the value of Earth observation

Remote sensing is quite a niche field. For the vast majority of people, satellite imagery refers to data they see in Google Maps – containing very high resolution visual spectrum images updated every once in a while. It’s that, or tracking the bad guy’s car in real time like you see in the movies. It can’t do that. It also does not cover every minute of every hour of every day for the area you are interested in. You cannot zoom in to read license plates or spy on your neighbour. They are “poor resolution” and contain a lot of data outside the visual spectrum. For most it is therefore not clear what value Sentinel data brings. And yet, it has tremendous value. On a slightly larger scale the resolution and temporal coverage is more than enough for many applications. You can monitor global and local processes with it, see the images in this article. Or, for example, a remote sensing Twitter feed, such as Copernicus. This is why we offer two publicly accessible and free applications which are an important part of the Sentinel Hub portfolio. Sentinel Playground is super easy to use, meant primarily for beginners to be able to start experimenting with the data and its various visualizations. EO Browser is more advanced and with its support for multiple satellite missions, time-lapse, statistical analysis, analytical exports, etc., with 32,000 monthly unique visitors and widespread use in education it is becoming one of the most important tools for raising awareness about what one can do with EO satellite data. It also often serves as an impartial viewpoint into what is happening with our planet.

About half of the requests processed by Sentinel Hub are served by these two applications. This does carry quite some cost for Sinergise, but it is seen as investment in the future, both to develop the business as well as to make the world a better place.

The Earth observation field has existed in science for decades. However, it is now being reborn as the enormous mass of remote sensing data is more easily accessible than ever. This has enabled to reach new groups of people and fostered the development of new data analysis methods, as the old ones no longer scale. Existing machine learning and computer vision methods, fine-tuned for images of cats, dogs and faces, are struggling with the ambiguity of remote sensing data – clouds, haze, shifting pixels, time-series, etc. Going beyond the identification of planes, ships and cars takes a group effort. This is why Sinergise, along with several other groups such as Development Seed, Azavea, Element 84, are sharing the results as open-source. Eo-learn, a Python library bridging the gap between satellite data and well-known machine learning tools such as TensorFlow, is proving to be a starting point for many data scientists.

Knowledge sharing goes also beyond the core scientific group. With tools such as EO Browser, just about anyone can observe the changes happening to our planet. To extract valuable information, one has to go beyond true color, false color, NDVI and other commonly used algorithms. This is why the custom script repository, an open-source GitHub repository with hundreds of algorithms which can easily be used in Sentinel Hub or ported to any other tool, is proving essential to the workflow of both beginners and experts.

In order to get as many people contributing their knowhow, Sinergise is, together with ESA and Copernicus, organizing a Custom Script Contest. With the submission deadline still weeks away, on 5th of May 2019, individuals and groups still have more than enough time to submit their script. 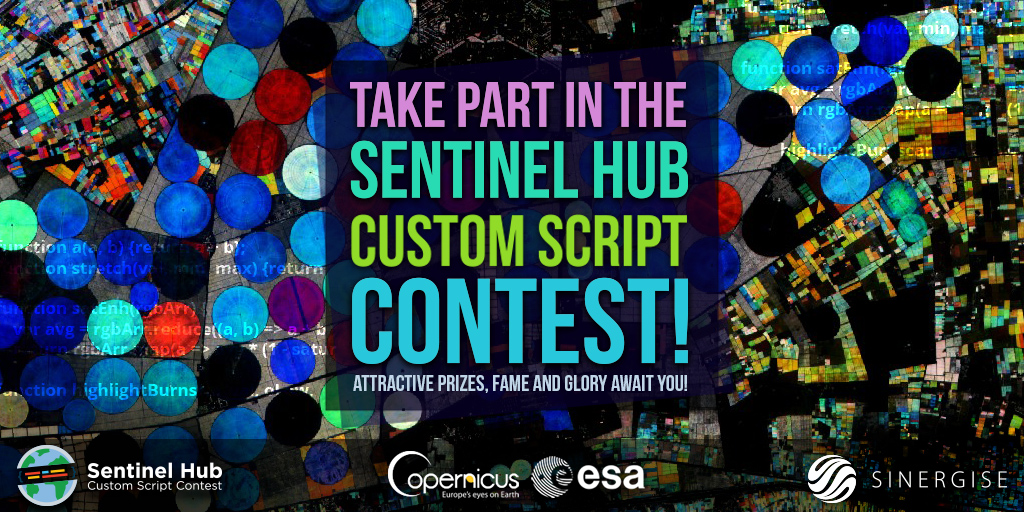 A million is cool. You know what is cooler? A billion!

Passing the hundred million mark is an important milestone, but it is far from the end. It is just a point in the stages of exponential growth. And yet, it is also a point when thinking of a redesign of the system is probably required to ensure further scalability. This will certainly be needed as Sentinel Hub is becoming a go-to place to get satellite data. ESA is now starting the Data Cube Facility Service project to deliver ARD (Analysis Ready Data) for both research and operational use, where Sentinel Hub will play an instrumental role serving various projects where the complexity of processing is ever growing. And with even larger volumes of data the added value of the platform will be even higher.

The Sentinel Hub project is a success story, not just of technical engineering, but also of the supportive programmes accessible to the European EO industry. It started as a small PECS project, getting some funding and, but more importantly, the recognition of the idea as well as guidance on what is relevant and what not. A Copernicus Masters award in 2016 provided visibility. EO Browser was ESA’s idea as well, proving crucial to demonstrate to potential clients that such a service not only works, but works well. The Sentinel Hub will be also a component of the European Data Cube Facility Service kicked-off in April 2019 within the EO science for society programme, for a project duration of 3 years. It is expected to be a major actor of the ESA sponsored EO platform ecosystem.

The EU’s Horizon 2020 programme as well as the SME Instrument and BigData projects assisted as well. For Sinergise, Sentinel Hub became a core business model long ago and most likely it would have been developed without all these instruments as well. However, with their support and recognition, it certainly gave us the drive and resources to develop the business harder and faster.

The Copernicus programme has put Europe on top globally from the point of Earth observation. Sentinel Hub and its EO Browser is making this even clearer. We are certainly thankful for being able to be part of all of this. 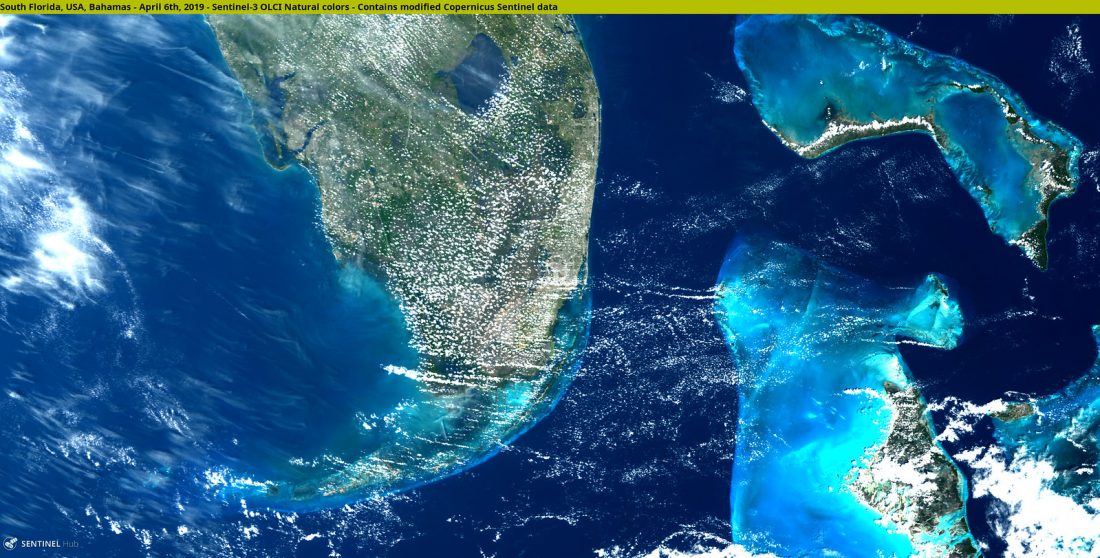